Debian 8.0 Jessie has been released! 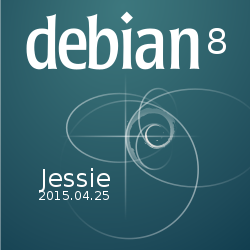 There's a new sheriff in town. And her name is Jessie. We're happy to announce the release of Debian 8.0, codenamed Jessie.

Already a happy Debian user and you only want to upgrade? You are just an apt-get dist-upgrade away from Jessie! Find how, reading the installation guide and the release notes.

Do you want to celebrate the release? Share the banner from this blog in your blog or your website!

The Debian Linux kernel team has discussed and chosen the kernel version to use as a basis for Debian 8 'jessie'.

This will be Linux 3.16, due to be released in early August. Release candidates for Linux 3.16 are already packaged and available in the experimental suite.

If you maintain a package that is closely bound to the kernel version - a kernel module or a userland application that depends on an unstable API - please ensure that it is compatible with Linux 3.16 prior to the freeze date (5th November, 2014). Incompatible packages are very likely to be removed from testing and not included in 'jessie'.